more than just a beach

Why community is cool – and makes you a better person

Most young people, if we are talking in the 20-25 age bracket, are primarily concerned with finishing their degree or apprenticeship, getting some money behind them and making it big in the big city – whether that’s in New Zealand or New York. The romantic notions of moving to London, or Auckland, and pursuing a career, in the ‘real world’ with ‘real money’ makes it sound as if we grow up in a Monopoly game. Life doesn’t start until you ‘Pass Go’ and are amongst the bright lights and city nights, paying your rent, landing on free parking and try to keep out of jail. However, not all young people should be thrown in this basket. While the temptation of the big city life is always there, some of us are more content with appreciating what we have got right here, the freedom from the big city life and all the responsibilities that come with it.

Living in a close knit, beach side community, such as Sumner, is a lifestyle one can only dream of while they are battling rush hour on their way to a cramped, dark and garden free inner city apartment. Living and working in your local community is a truly rewarding experience. As well as allowing you to pop home for lunch, it provides a platform to establish contacts within a variety of different industries. As my father always reiterated, “its not what you know, its who you know” and this fact has definitely been proved true since I have lived here, scoring two jobs locally without even expressing interest. 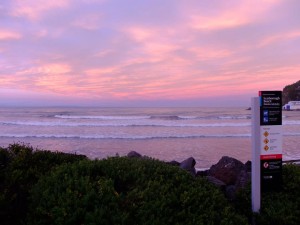 Nevermind that, the daily reminders of why the village life is for me certainly outweigh the employment factors. Just last week I decided to go for a run, upon reaching the beach I heard someone call out my name. I turned around to find my flatmate (Alice) jumping out of her car, on her way to check out the waves. As it happened, the waves were pumping (by Sumner standards) and we decided to hit the swell while the sun was still up. I decided to run a little further before returning home to put on my already dripping wetsuit. Anyway as I ran down the Esplanade I bumped into Tom (Alice’s brother) he was perfoming something which resembled yoga with a wetsuit on, before launching into the swell. The point to this extracted and rather roundabout story is that on one outing I bumped into two people I knew. This is not a special event, or one that I have remembered because it was so unique, it is just an example of what happens every time I go out! Everywhere I go I bump into people who have put up with me dropping in on their wave, or who always seem to be infront of me in the fish and chip shop queue. In a way this regular contact has made me be a better person. When you do accidently drop in on someones wave out in the surf it is of your great interest to apologise immediately, waves are few and far between and you don’t want to make enemies. The village is a small place and it pays to keep on the right side of everyone, and the left side of the quiet, tree lined streets. 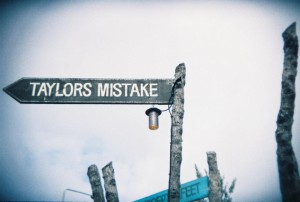 The opportunity to have a thriving vegetable or herb garden is something I had scarcely considered before landing on Sumner’s soils. As with those living in a city, often gardening is put in the too hard basket, with claims like “I don’t have room, or time for growing that rabbit food” being heard all too often. However, I adapted to the village way of life quickly and began to find time to take responsibility for my health and try my hand at growing my own vegetables. I was quick to discover that not only does it save you money, it is also very rewarding. Seeing Clive (the chive), Rachel (the rocket), Simon (the spinach) and Barry (the basil) grow and mature was exciting in itself and continues to provide a great sense of fulfillment, in my stomach and in my now nutriciously fed flatmates. We were helped with the establishment of our vegetable garden by our neighbours who constantly could be found popping over the fence with a stray cucumber or marrow. Even a zuchini plant turned up once, along with our neighbour Ian who would often be found strolling through our garden having just turned the sprinkler on for us. Ian is not just our token garden waterer, but also the coordinator of our street’s security network, helping to provide everyone with the peace of mind that their neighbours are right at hand should anything happen to them or their property.

To some, all this talk may sound like the dream of retirement, but I can assure you it is the reality of Sumner life. Belonging to a community and having a neighbourhood watch group may not sound cool when you are young twenty-something pursuing a career and embracing the ‘real world’ but in reality, it is cool. Surfing at sunrise with your housemates, knowing everyone in the village and growing your own produce is way cooler than traffic jams, frozen vegetables from a packet and living in a concrete jungle. Although the days are getting shorter, the sea is getting colder and that summer glow has melted away for another few months, it never hurts to remember to be grateful for the great community that we live in.

This entry was posted in Uncategorized. Bookmark the permalink.